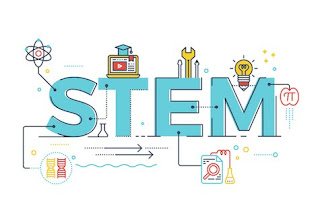 For the readers who have been to an RSA meeting of some kind or another you have heard of the STEM Program. Don't worry, I'm not going to tell you something you've already heard. However I would like to talk about why it is important for the kids.

When I was growing up there wasn't any push for a STEM based education. Most of the focus was on literature, vocabulary, and writing. Not that those are unimportant, but I feel my time would have been better spent in a physics class or a engineering class. I felt like the whole goal of the school system was to push me into college and that was all.

My senior year of high school I met my all time favorite teacher Mr. Smith. He saw the need for engineering and technology classes and made it happen. He bought a 3D printer and a subscription to a Computer Aided Design program called SolidWorks and got to work. His class quickly became my favorite. I spent the majority of my lunches in the computer lab designing a hydraulic crane to pick up ping pong balls. When that project was finished I was quite proud of what my partner and I had built. With his help, I was able to get an internship designing test equipment for researchers at Georgia Tech.

Mr. Smith encouraged me to join our schools robotics team. I had no idea we even had one, but I will always be thankful to have been a part of that team. I learned how to work with others in a more professional setting, and it gave me the opportunity to make friends with people who I normally wouldn't have interacted with. I was also given the opportunity to help build the middle school and elementary school robotics team. I hope that it is currently encouraging young kids to be excited about Science Technology Engineering and Math. Thank you Mr. Smith.

While the RSA's STEM program can be difficult to run, think about how it can encourage the children in your area to become scientists and engineers. You could be the Mr. Smith that those children need!

Popular posts from this blog

The History of Roller Hockey

January 10, 2020
I remember asking my parents to let me play hockey when I was little but they told me "there wasn't a team near by" so I never got into it. Because of that, I will let someone else tell the story this week. Here is the, link https://thehockeynews.com/all-access/article/roller-hockey-international-an-oral-history  I hope y'all have a great weekend!
Post a Comment
Read more

October 15, 2019
I've been waiting for this since last October! This is probably my favorite time of year, because everyone is gathered in one place. We get to see old friends and meet new ones. The trade show isn't just about selling lots of skates, but its about the skating community. The skating community is special because when we are all together we seem to get a long well. I'm sure someone is reading this thinking "are you kidding me this person or that person is such a pain". Maybe you think I'm a pain, who knows. Anyway for the most part we really get a long. I feel like the 2019 trade show is really about all of us getting together under one roof. Oh and don't forget the barbecue. I hope to see you next week!
Post a Comment
Read more